Protecting His Princess back cover copy

In this kingdom, not even the royals are immune to danger.

With a sexy FBI agent posing as her suitor, Princess Laila of Qamsar is home for the wedding of her brother the Emir. In truth, the beautiful royal and Harris Truman are on an undercover mission: to find the infamous terrorist her brother is suspected of aiding.

But once the festivities begin, Laila faces a bigger threat than Al-Adel. Her secret meetings with Harris pose a danger to her safety­—and her heart. To gain his love and live in freedom as his equal is her ardent desire. But will she betray her traditions for a man whose kisses are part of a charade?

Hiding His Witness in the UK

I am excited to share the news that Hiding His Witness is being released in the UK as a Mills & Boon Intrigue. 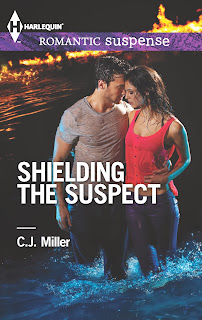 She woke up on her ex-fiancé's boat with his blood on her hands. Is it possible that Susan Prescott killed Justin and didn't remember it? When the artist is accused of murder, the only one who will believe and protect her is Brady Truman. Brady, her former lover. Brady, who must dispel his agonizing self-doubts if he hopes to help anyone else....

To find the real killer - and the hitmen gunning for them - Susan and Brady have to deal with their still-simmering desire. It all hinges on Susan's memory. Will returning to the boat trigger her recall...or plunge her deeper into danger?
at June 06, 2013 2 comments:

I don't like for my books to make political or religious statements. While I may mention a character's political leanings or infer they practice a certain religion, I don't think romance readers want any soap-boxing from an author. In the past, I've stopped reading an author when her books became a hammer to drive in points about her personal beliefs regarding those oh-so-polarizing topics.

In my current work in progress, my characters are undercover as religious figures and as I'm writing, I'm starting to worry it will offend some readers. Religion in any context is a difficult topic to broach. I've tried thinking of another way for them to be undercover ---- the situation they are investigating has nothing to do with any church --- but religious figure makes the most sense.