FAQ What do you do?

I get this question a lot. It's an easy getting-to-know you question. I am never sure how to answer.

I'm a stay-at-home mom by day and a freelance IT consultant and romance novelist by night. Each of these jobs comes with a series of preconceptions, but since this blog is about books, I'll stick to the last on the list: romance novelist.

Q. Have I heard of you?
A. Depends. Do you read romantic suspense? If you're a casual reader and you stick to the big names - Grisham, Roberts, Patterson, King - then no, I am not one of those authors. But if you haven't heard of me, I'd love for you to give my book a read.

Q. Can you give me a free book?
A. I keep some copies of my novels around the house for myself and my family, but I earn my living from royalties, meaning I get a percentage of each book sold. Just like you wouldn't ask your mechanic to fix your car for free, or ask a musician to play at your wedding for free, or ask someone to fix your computer for free, you probably shouldn't ask me for a free copy.

Next time someone asks me this question, what should I lead with? The writing? The mom gig? What do you think?

When Albany Detective Brianna “Bree” Morris learns that Cuban crime lord Milan Varela wants her estranged father dead, she heads off to Miami to find out why. With Homicide Detective Jayce Matthews and her ex-lover Detective Steven Kemp she devises a plot to get close to the Varela organization.

Brianna finds herself attracted to the older Milan and falls deep into his web of seduction while fighting to keep her mind on her mission. Milan is equally drawn to Brianna and vows to win her trust and her heart.

Is Milan really the villain when it comes to Brianna’s father? Or is he the victim?

Is Brianna’s father really in danger or is there more to the story than anyone could ever imagine?

Brianna risks her life to save her father’s but will she end up losing her own? 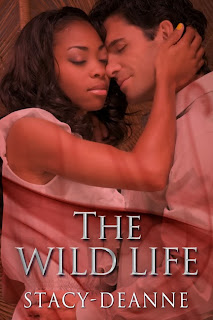 Background on the Bree and Steven Interracial Romantic Suspense series:

Albany Detectives Brianna “Bree” Morris and Steven Kemp originate from my ’08 novel Melody. I fell in love with them instantly and I knew there was more I wanted to explore with these characters. I also got feedback from readers who enjoyed them. Bree is black and Steven is white which brings in the main interracial aspect. They are also ex-lovers and Steven is still pining for Bree. Whether she takes that step with him again, who knows? Throughout the series the two have different romantic adventures with others but their friendship remains strong.

Upcoming plans for the series:

Aside from The Wild Life, I’ll definitely be releasing two more books in the series. The next, Harm a Fly comes out December 2014 and the fifth installment hopefully will be released in 2015. I love these characters, but I am not sure if I will continue the series after the fifth installment. I am starting new series with new characters so I have to see how much time I still wanna devote to Bree and Steven. So other than the next two releases, it’s hard to say what will be in store for Bree and Steven. Whatever happens, I listen to my muse in order to make the right decision.

Why The Wild Life stands out from the current books in the series:

In The Wild Life readers get a glimpse into Bree’s childhood and her strained relationship with her father, George. When people see what Bree went through because of her father it will give them a better understanding as to why she is the way she is. Bree has some issues committing and that’s one of the main reasons she continues to push Steven away. Her behavior is a direct result of her nonexistent relationship with George.

Do you think fans of the series will be happy with The Wild Life? Why?

I hope so. From the feedback I’ve gotten from advanced reviews I think they will like The Wild Life better than the previous installments. Everyone who’s read it says it’s the best book in the series. The story is quite different from the other two because it takes place in Miami, and this installment focuses on Bree and her upbringing.

What personal growths or challenges does the main character go through in The Wild Life?

Bree struggles with the fact that her father was never there for her. What hurts more than that is when she finally realizes he will never change, and that who he has been is just who he is. Bree wanted a father and she never got that in George. It’s heartbreaking when she confronts those painful feelings about how he abandoned her. Bree becomes a woman all over again in this book. She has to accept that when it comes to George, she will never find a happy ending. So she learns to accept her father for what he is even though it hurts.

If The Wild Life became a film, who would you cast as the main characters?

I created Steven’s character because of my obsession with the actor Stephen Dorff. I would love for him to play Steven. There are other talents that would work such as Jude Law, Jeremy Renner, Simon Baker, etc. But I patterned Steven after Stephen Dorff. The only difference is that my Steven is taller. LOL! I’ve always had two women in mind for Bree. Gabrielle Union and Sanaa Lathan would be perfect as Bree.

Why should existing and potential fans check out the book?

People familiar with my books have come to know me for bringing out some knockout twists and I hope I don’t disappoint with this book. Readers seem to enjoy my style so those who’ve read the other installments will wanna read this one. Also, if people want a taste of something different such as suspense with interracial romance subplots, look no further.

“What do you expect me to say, Steve?” Brianna sat beside Jayce. “I don’t even know what’s going on.”

He bent over her. “Can’t anything go well for you, woman? Why do you keep getting yourself in these predicaments?”

“Oh excuse me for coming home and finding a man in my kitchen!”

Jersey tugged on her ears. “I have a huge headache and one of my officers has just been attacked. The last thing I need is for you two to argue.”

Steven and Brianna made faces at each other.

“We’re worried about you, Morris. Tell us what’s going on so we can help.”

Davis slunk into the room and rested at Brianna’s feet. She scooped up the brown feline.

“The guy that tried to kill me…” She scratched Davis’ ear. “Well he worked for Milan Varela.”

“Are you f***** kidding me? A man who worked for the head of the Southern Cuban Mafia was here? Here?”

“I was telling Bree that a friend of mine in the FBI might be able to help her,” Jayce said. “It’s about her father. They’re looking for him.”

“George?” Jersey’s green eyes beamed from behind her glasses. “What the hell would the Cuban Mafia want with George?”

“No telling. You know the life my father lives. It’s full of risks and he makes no apologies for it.”

Jersey touched the back of her neck. “How the hell could he even get close to Milan Varela in the first place?”

“So this is the type of stuff your father’s always into?”

“Jayce my father has never been a father to me. He stays gone for decades at a time and pops up probably once every ten or fifteen years when he wants something. I wonder if he even remembers he has a
daughter half the time.” She kissed Davis’ head. “Right now what’s important is this mess he’s got going with Milan. Why would he want my dad dead?”

“I just can’t believe this. I mean your dad has been involved in some shady things during his life but nothing like this. What are you gonna do, Morris?”

“As much as I hate him, I can’t let anything happen to him. I gotta find out where he is.”

The Wild Life is available in print and e-book.

Thanks, Stacy-Deanne for stopping by to tell us about your book!