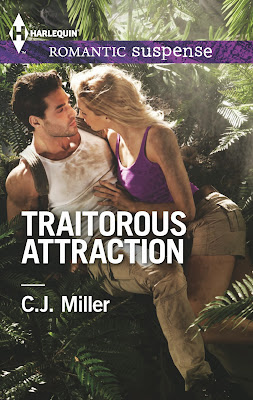 FROM STEAMY JUNGLES TO OPULENT PALACES, IT'S NONSTOP ACTION, DANGER AND PASSION FOR TWO SEXY AGENTS

To find a "dead" agent, intelligence analyst Kate Squire needs the man's brother—retired Sphere operative Connor West. His skills as a trained assassin are essential for her mission…but her immediate, raw attraction for the man himself is not.

For a loner like Connor, trekking into the jungle with a secretive killer blonde at his side is not textbook. Caught between armed insurgents and hungry predators, he fears Kate may be his deadliest threat…until their very agency turns on them. Stranded, outmanned and outgunned, Connor has nowhere else to turn. Trusting the gorgeous spy may be the only way to get them out alive….

Available May 2014 from Harlequin Romantic Suspense.
at January 30, 2014 No comments:

Use the widget below to get your e-book copy of Hiding His Witness, Shielding the Suspect or Protecting His Princess signed.

In my current work in progress, I have a character who my beta reader says is unlikeable and flat. In other words, uninteresting.

I take what my beta reader tells me to heart and I've been thinking about interesting characters. What makes a character intriguing and worth a reader's time? What makes a reader stick by her for 200+ pages and want her to have a happily ever after?

Here's what I've come up with so far.

2. Be relateable. If a reader can't see herself in any quality the character has, it's hard to connect. The same way we bond with people who have similar interests, same goes for a character.

3. Not be a Mary Sue. We all have a friend on social media whose posts would indicate she has a perfect life. We all know that person is lying. Knowing doesn't stop it from being annoying and it doesn't stop me from un-following/hiding that person's posts. Everyone is fighting a battle with their demons. A character's battles should be laid plain for the reader to see.

4. Make a first impression. How she is introduced to the reader and the other characters is important. The manner in which those characters speak to her and think about her makes an impression, good or bad.

5. Be believable. No one works all the time. No one loves every aspect of their job. Characters are rarely ALWAYS something and NEVER another, at least in their choices and personality.

6. Have a goal or direction. Have something important at stake. Why does it matter for a character to succeed? What happens if she fails?

7. Be good at something. While a bumbling fool might be sympathetic, no one wants a heroine who blindly or through luck finds a happily ever after. She needs to take ownership of her path.

9. Think outside the box. When writing, dismiss the first, second and third idea. They're too predictable.

10. Not have a really annoying and overly distracting trait. No crying in response to every conflict. My personal pet peeve is a character who bites her lip constantly. TSTL, too stupid to live, heroines annoy readers.

Now, the hard part is rewriting her so that she comes alive on the page!

What traits do your favorite characters have? What makes a character stay with you after you finish a book?